In 2017, OP together with Nordic Morning set out on a bold effort: building the biggest electronic voting ever held in Finland – more than 1.5 million owner-customers with a right to vote, 81 cooperative banks and 157 constituencies.

The Representative Assembly elections have long been organized by utilizing paper processes and postal service. When designing the electronic voting process, the first step was to identify the fundaments of traditional elections and the ways of their operation. The findings were analyzed and restructured based on the viewpoint of the voters and the owner-members who wanted to stand as candidates.

There are three different segments of customers that the election concerns and that need to be supported by the process: those who want to stand as candidates, their supporters and voters. In addition to these groups, the service was also used by photographers and cooperative banks' own administrators.

From the service design’s point of view, a further challenge to the project was the fact that all OP Financial Group’s cooperative banks do not participate in elections every four years at the same time. In addition, the various phases of the elections were divided over a long time period, and different segments of customers were targeted at different stages.

OP took a bold step and decided to restrict considerably the share of the electoral process based on postal service. Only 25 percent of the electors were informed of the traditional election based on postal service, the rest of the target group entitled to vote received the election announcement online. The owner-customers of age and using the OP eServices submitted their vote electronically. Other owner-customers and underage owner-customers voted in the traditional election. As the letter voting coincided with the electronic election, the latter had to be planned so that offline and online processes supported each other.

The nomination, the support of the candidates, the photographer's service, the election compass and the vote itself were merged into a single electronic service that was available both on a computer and on a mobile device.

In an unprecedented effort, 81 independent cooperative banks and five manual services that were previously completely separate were bundled into a single digital service. The result was the largest electronic election in Finland’s history to date. And all this in just six months. 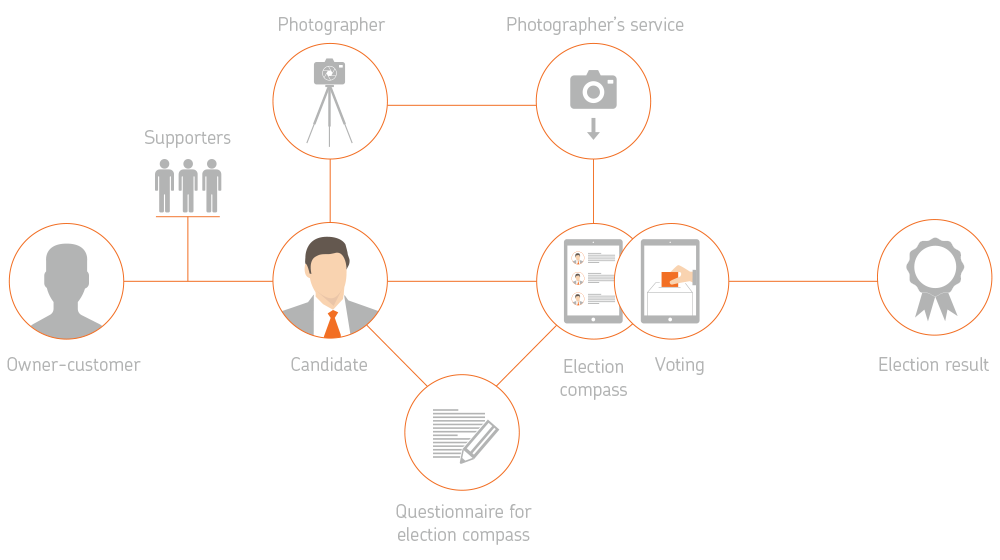 The website www.op-edustajistonvaalit.fi was the hub of all electoral activity and communication. For the website, a timeline was created, the content of which changed according to the then-current stage in the election process. 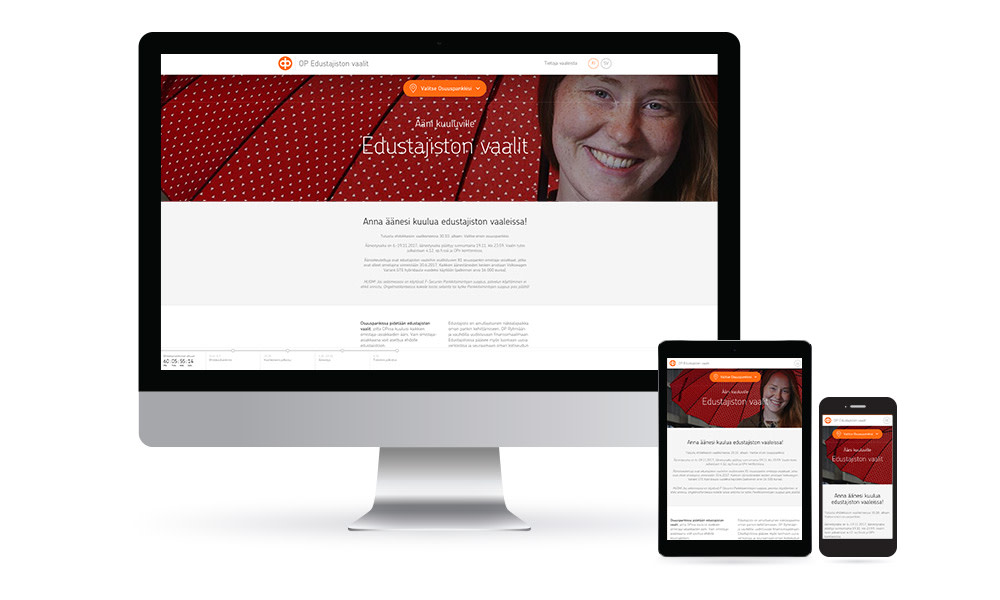 For the first time in OP’s elections, the nominations were handled completely by electronic means. On the basis of the data provided by OP to Nordic Morning, it was possible to validate all the owner-members who wanted to stand as candidates.

Each approved candidate was photographed in a photographic studio authorized by OP. The photographers uploaded the photos of each candidate to the system using a voucher given by a candidate as the candidate's ID.

After the nomination period, each cooperative bank approved and created its own final list of candidates in the system.

Voters logged into the system with their own OP netbank access codes. For the first time in the world, an election compass was integrated as an essential part of the voting service, so that it was possible to use the election compass and choose the candidate still in a voting situation.

Combining activities that were previously separate provided significant benefits for OP Financial Group. The accessibility of voters and candidates, the enhancement of efficiency and the promotion of OP’s forerunner image are all the results that were achieved by organizing electronic voting.

The goal was to invite a versatile group of owner-customers to participate as candidates in the election, and this turned out to be a success. Thanks to the e-service, more than 5,600 candidates took part in the election, which was a bigger group than ever before. The number of voters who submitted their votes electronically was two-fold compared to the previous elections, and the number of cooperative banks participating in the election was record high. A total of more than 2,300 new Representative Assembly members were elected for OP Financial Group’s cooperative banks.

Due to electronic identification it was possible to efficiently collect data on voters and ways of voting, which cannot be achieved in traditional elections. This data can be utilized to develop the election of the Representative Assemblies for OP Financial Group’s cooperative banks further into more and more functional service. Concerning next election, raising the awareness of the elections and fostering the participation of young people came up as future development goals. 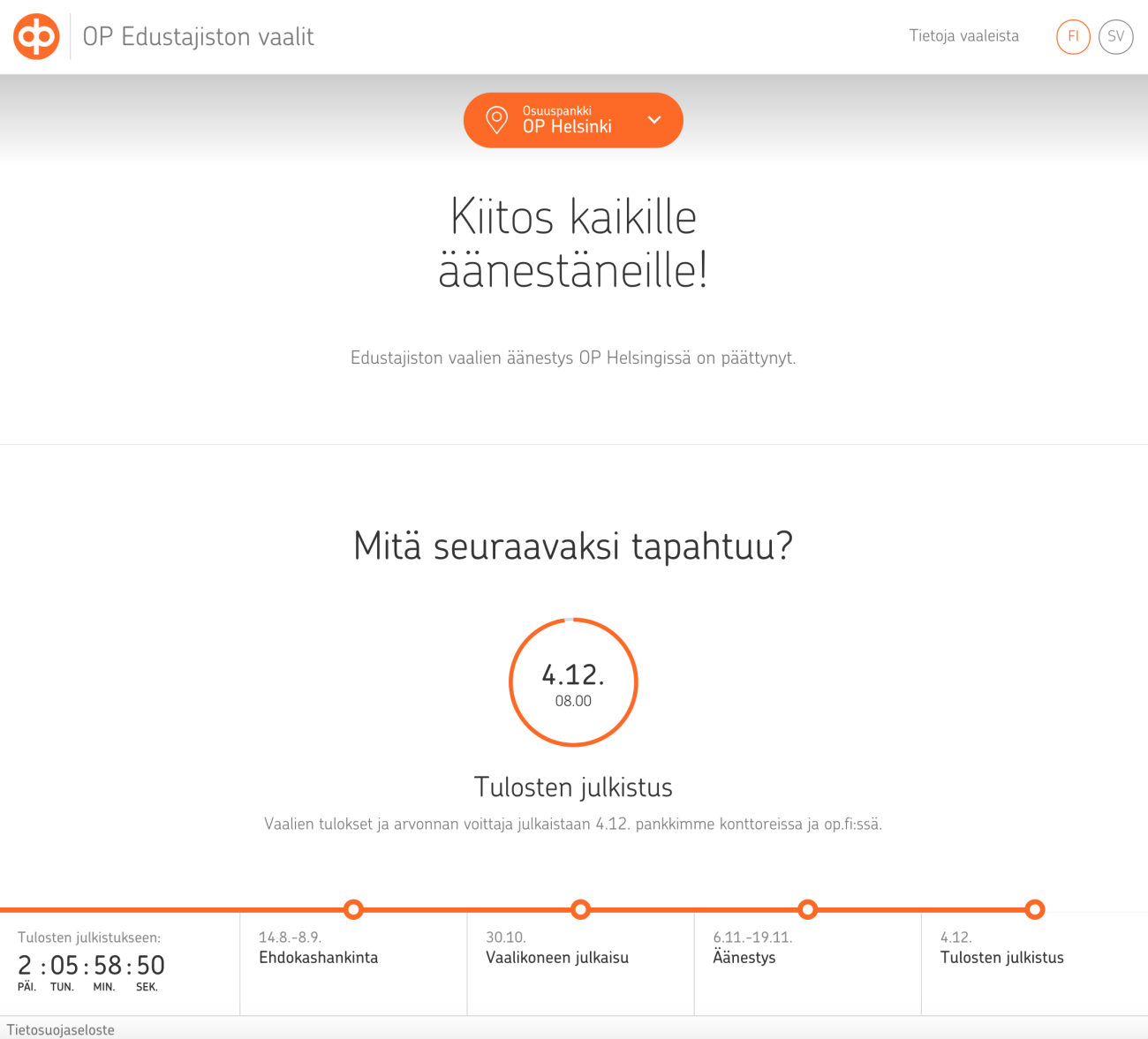